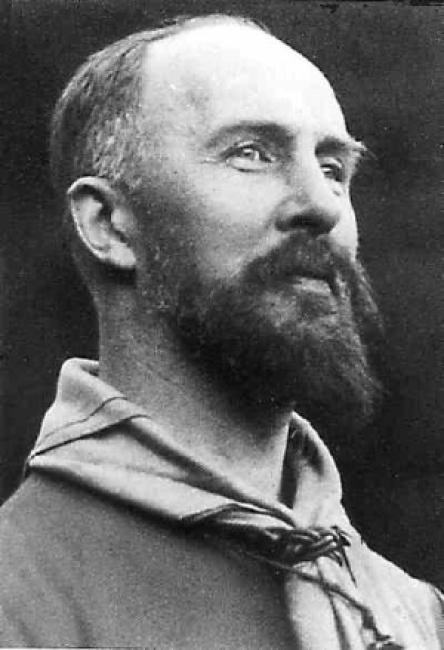 Fr. Jacques Sevin (1882-1951) was a French Jesuit priest who is considered the “Father of Catholic Scouting.” Fr. Sevin was intrigued by the Scouting Movement that was founded in 1907 by Lord Robert Baden-Powell. After its initial success, scouting was criticized by many Catholics. Despite this, Sevin spent the summer of 1913, while he was still a Jesuit novitiate, in England seeing the movement for himself. He met and befriended Baden-Powell, spent time in scout camps, and dreamed of taking the movement to France.

By 1919 Fr. Sevin was a Jesuit priest and had produced a handbook on scouts called “Le Scotisme.” In this book he laid out his vision for a distinctly Catholic form of Scouting. In 1920 he founded the Scouts de France using this model. Baden-Powell said of Fr. Sevin’s efforts: “He made the best realization of my own thoughts.” Fr. Sevin’s vision was for scouting to develop the faith of young people and integrate them into the Church. It would be a means to develop committed lay people and religious vocations.

Fr. Sevin’s own spirituality was largely influenced by the spiritualities of St. Ignatius of Loyola, St. Teresa of Avila, and St. Thérèse of Lisieux. In 1944, Fr. Sevin founded the Congregation of the Sisters of the Holy Cross of Jerusalem with some Girl Guides from the Scouts de France. His last words to the Sisters of the Holy Cross were: “Be saints. That is all that matters.” On May 10th, 2012, Benedict XVI declared Fr. Sevin venerable.

Lord Jesus,
Teach us to be generous,
To serve You as You deserve it,
To give without counting,
To fight without care of injuries,
To work without looking for rest,
To spend ourselves without waiting for any reward
Except knowing that we fulfill Your holy will.
Amen